Getting Better at X 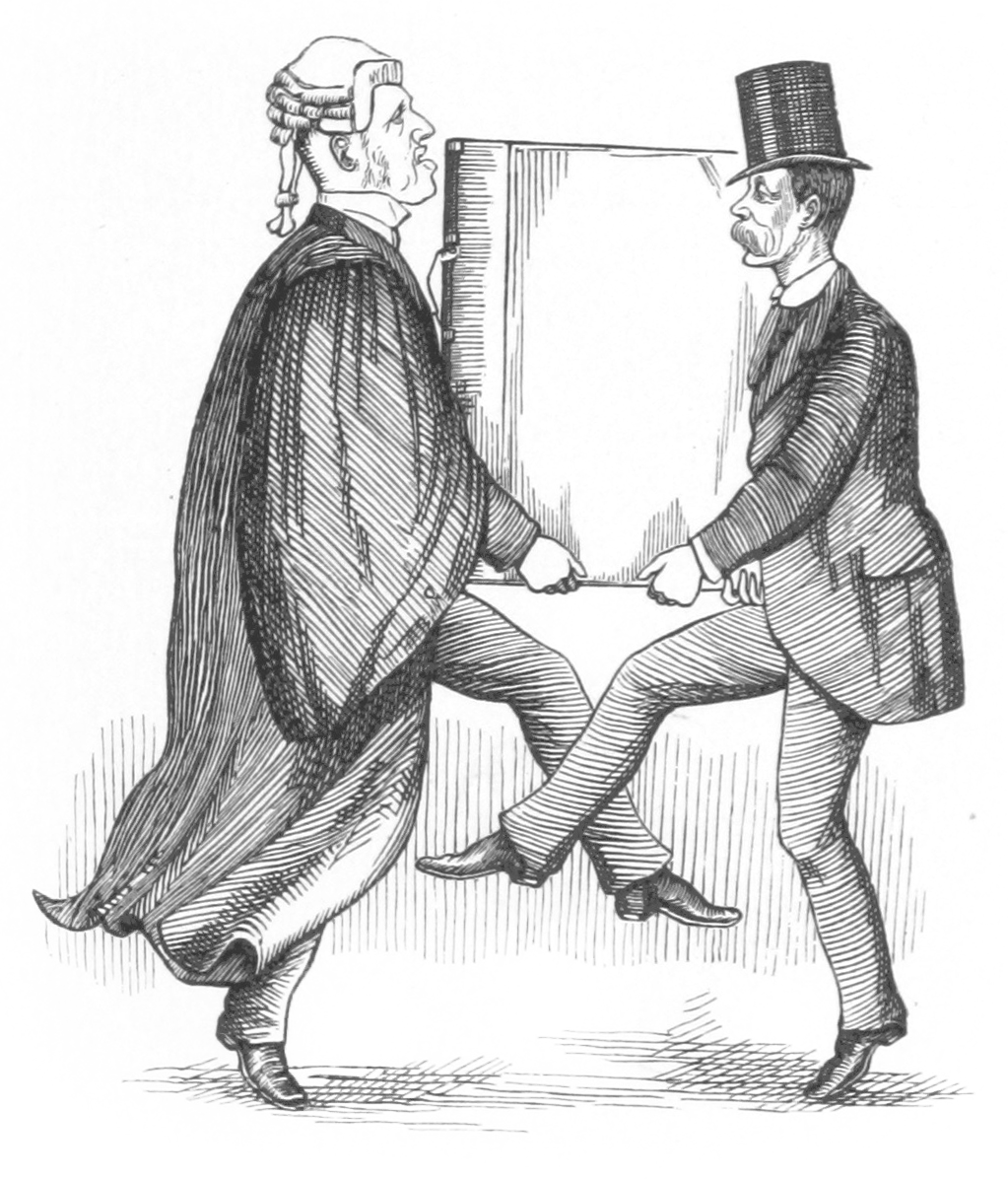 When talking about dynamics within a team we often talk about Power Dynamics, which is a term which can mean a slightly different thing to different people. My understanding of the term is that it describes the way two or more individuals interact with each other between whom there exists a power discrepancy.

There are many examples of these sorts of Power Dynamics, such as the interaction between highly experienced individuals and their newcomer colleagues, or those between individuals with academic degrees and those who are self taught.

Today I’d like to focus on a particular activity my team has been conducteing which, I believe, has had a mitigating force on some of these dynamics, called Getting Better at X.

A Getting Better at X session is a meeting involving all the members of the team, in which the team discusses how to get better at doing X.

For example, in our Getting Better at Pairing the team discussed how to get better at the daily activity of Pair Programming, a result of which was the creation of our Pairing checklist.

This might sound like a simple enough idea, and I won’t argue that there is anything particularly groundbreaking about this activity, but I feel it is worth presenting our method to these sessions as we have found it has produced good results for us.

At its core, We do this in an effort of encouraging an environment of continuously improving, but I have also recognised a side benefit in relation to power dynamics which I will describe after presenting the method.

Define what you consider to be good

Like any truly agile team, we live on an unhealthy diet of post-it notes and sharpies. We begin the session by asking everyone to answer the simple question: What does good X look like to you?

We take 15 minutes during which each team member scribbles down all the properties of a successful and positive X.

For example, in a Getting Better at Pairing session, you might end up with a window of post-its like this: 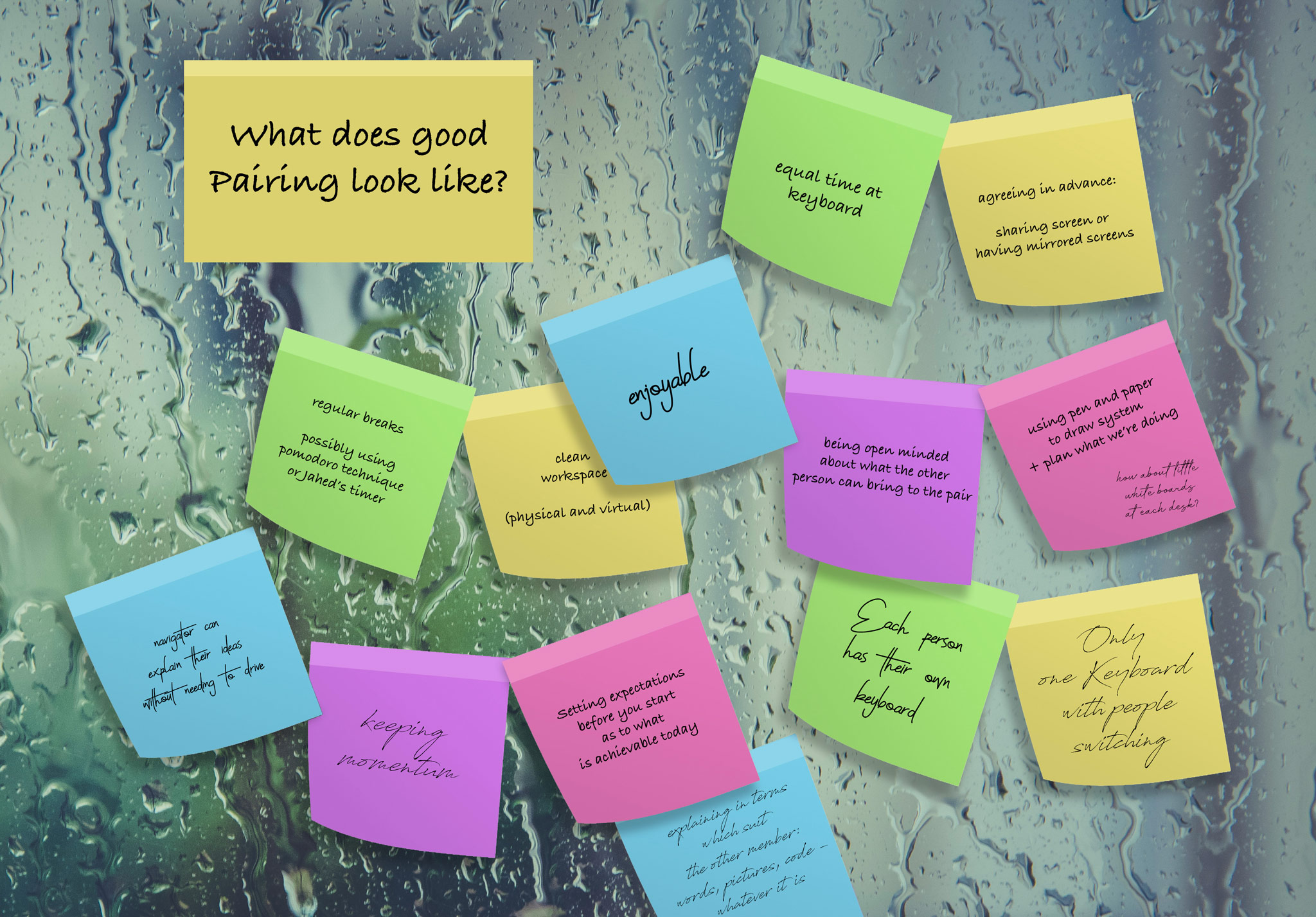 For example, you can see that two team member disagree on what keyboard configuration would make a good pairing session for them, and that’s absolutely fine.

Unhealthy to the planet that is. In an attempt to mitigate this we’ve been experimenting with digital alternatives, though we have yet to find a single good alternative.

Define what you consider to be bad

Next we repeat the process with a slight change, we now spend 15 minutes brainstorming on what properties make a bad X.

If we go back to our Getting Better at Pairing example, we might end up with a second window of post-its like this: 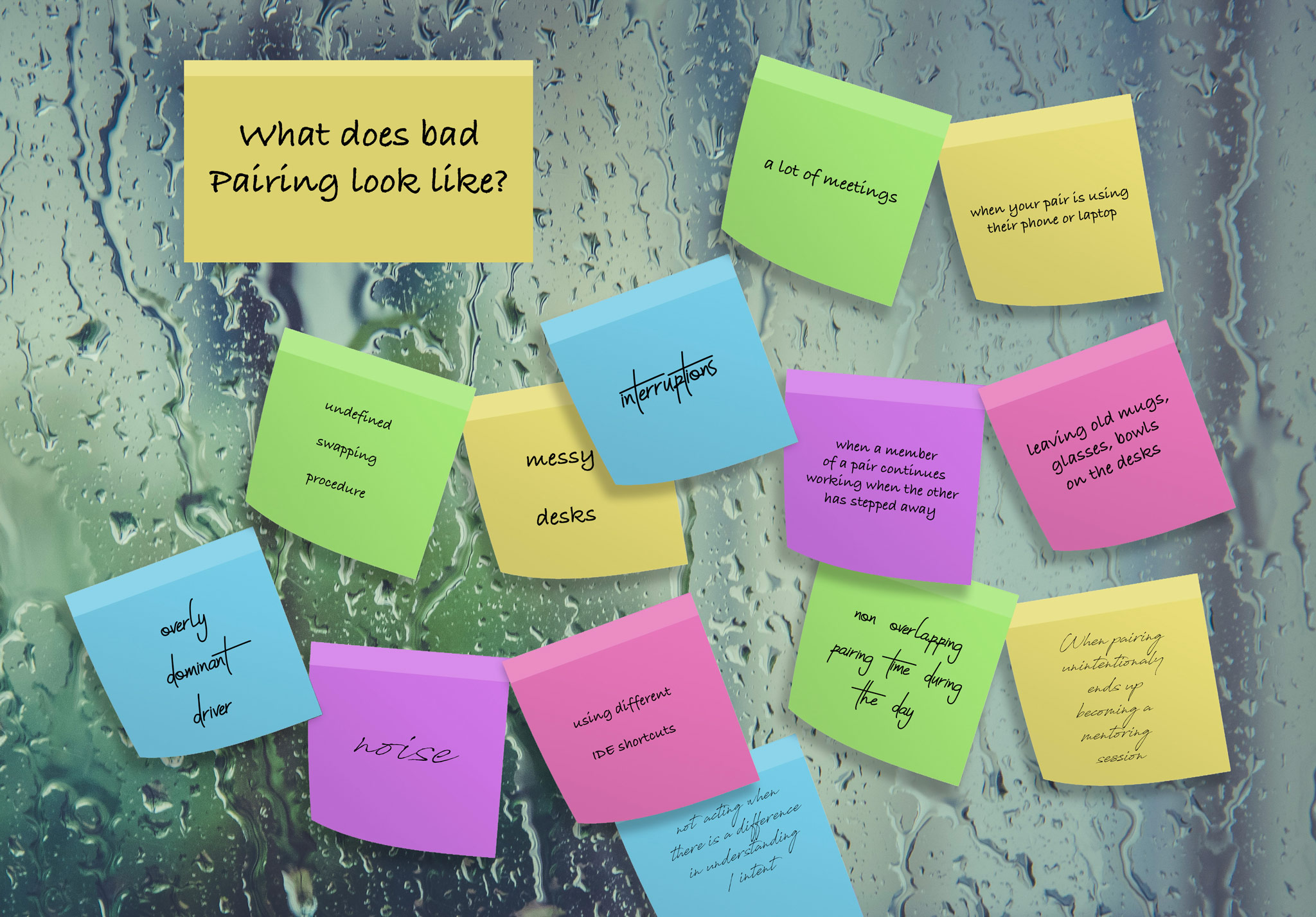 At this point the team should be able to run through all of the points on the window.

The process we have cultivated has worked more or less in the following manner:

Group related post-its, be they good or bad, so that each group represents a topic, such as Keyboard Switching or How we teach as part of a pair. It is perfectly valid for a post-it to remain on it’s own if it represents a valid concern on its own.

The grouping helps reduce repeated conversations as you run through the list and focus the discussion.

Discuss the post-its, group by group, allowing each person who wishes to express why they agree or disagree with the notion that the behaviour on the post-it makes an X good or bad.

As the team converges on a list of behaviours which they feel encourage good, or bad, X, we try to produce a corresponding list of Working Agreements which will encourage, or discourage, the team of exhibiting these behaviours where appropriate.

For example, on our Getting Better at Pairing session we all agreed messy desks make it harder to enjoy a good pairing session, so we defined a working agreement to clean up the desk prior to every session. Has it worked 100% of the time? No, but it has defined a social contract which has made it easier to enforce the desired behaviour.

If the team fails to agree on the validty of a post-it, feel free to cull it.

One possible situation you may encounter is where the team identifies multiple behaviours to be subjectively valid, depending on the context.

We encountered such a situation in our Getting Better at Pairing session. In our case, it was the choice between pairing on a single keyboard, where developers swap seats every set period of time, and that of a multiple keyboard setup where each developer has their own. The team felt both approaches were appropriate depending on the pair invovled.

In such a situation you can set a working agreement where by each pair discusses the method they would prefer to use prior to each pairing session.

One Thing to Keep in Mind

When holding the discussion there is a danger of a minority’s preferences being trampled by the majority and their concerns being culled.

The success of such sessions is predicated on the team already enjoying a good level of trust and respect, and I would generally recommend attempting such sessions only after the socialisation of higher impact activities such as Feedback & Cake.

That said, it is important to remember that no single activity creates Psychological Safety and Trust. Rather it is the accumulative result of a variety of activities, such as those I have described over the past few blog posts. The nice part is that even though there’s a co-dependance between these activities, the introduction of each new activity enhances the effects of the activities you have already introduced. The first few will be hard, the following activities will get easier, better and will allow you to reiterate on recurring activities more effectively.

Once you have finished running through your post-its you should have a list of Working Agreements which the team has converged on.

I would recommend assigning actions to team members whose responsibility it will be to make sure these working agreements are acted upon.

In my team we only assign working agreements to individuals if a task is needed in order to facilitate the adoption of the agreement by the team.

All other working agreements are co-owned by the team and we hold regular sessions where the team ensures it is in fact following through on its working agreements. That said, I would recommend assigning a specific individual the task of scheduling this recurring session (otherwise it is unlikely to actually happen).

For example, we came out of our session, with the following Actions:

On the face of it, this method is nothing more than an attempt to socialise the idea that the team should continuously question its practices and improve at executing them, but I have also identified a slightly nuanced benefit.

As I mentioned at the start of this post, I think a lot about how different power dynamics are at play in my team. One such dynamic which has been a concern to us is the discrepancy in power between long standing members of the team and newcomers who have recently joined.

This fallacious idea often entrenches teams into ways of working which have not only ceased to work due to changes in circumstance or context, but whose original rationale has gone long forgotten.

By continuously asking how do we want to work? and why do we want to work this way? we mitigate the effects of this power dynamic by giving new voices equal footing in prescribing the team’s working agreements and practices.

What Can We Be Better At?

In my team we’ve focused on our day to day practices, running Getting Better At sessions on:

In fact, next week we plan on running a session on mobbing as several team mates have expressed that they feel we aren’t being as effective as we could be at conducting Mob Programming sessions.

I hope we never stop questioning our practices, as we can always be better and more so, because what works for the team today might not work for the team tomorrow.