Structured Greping Of Structured Logging
What Else Have You Written About?
Tech Ethics

The Tech Civilisation Circles of Influence 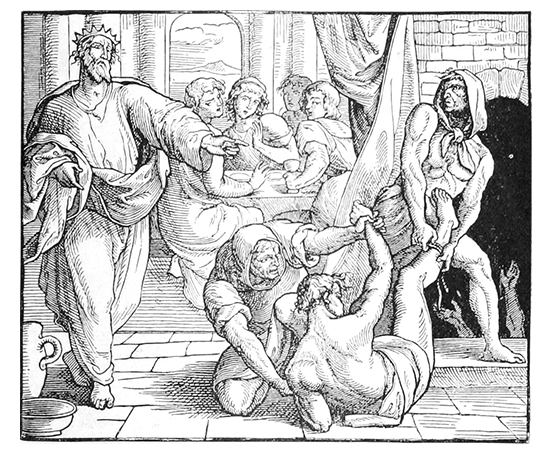 Having recently hit the half point mark, where I can accurately state that I have spent half of my life within a single industry, I find myself looking around and taking stock of how much both I and said industry have changed in the intervening years.

The tech industry is still a relatively young industry, and I have been fortunate enough to have witnessed how it has transformed from a specialised industry, whose impact can be easily defined, into a ubiquitous industry the impact of which is far harder to trace, let alone understand.

Every Company Is Now a Tech Company

I am far from being the first to make this statement. In fact, I would say that this statement is a tautology now and no one argues against it.

What I don’t think has truly sank in though, is what this means for our society as a whole, and that is part of the driving force behind the first instalment of the Beyond Tech conference I attended last week.

What Beyond Tech seems to seek to address is all the topics that are beyond the technical in the tech industry. By technical, I mean related to code and the process around delivering code. What that leaves you with is a variety of aspects in which the tech industry plays an active role in society, whether it likes to or not.

How The Conversation Has Changed

I’m about to make an observation which I am perfectly able to recognise is both an anecdotal point-of-view and biased by my own experience and that is the following: Tech is no longer an industry, but rather a civilisation, made up of many unique societies, industries, and ways of life and which mirrors the established societies of our world, exhibiting the same virtues and ills of these societies.

This did not seem to be the case when I was a teenager and laying the foundations to what would become my career. At the time the conversation around Tech, with a capital T, was about technology, pure and simple. We talked about engineering, as a discipline; about products as a technical achievement; about leaving society at the door and focusing on “the work”.

I now understand how privileged I was to have the freedom to get away with those conversations, the freedom I had as a white, able-bodied, cisgendered middle-class male to believe that such a thing existed as leaving society at the door; but at the time, I was just a teenager with all the privilege in the world to focus on their personal interests without a care in the world.

I don’t say this with guilt, I couldn’t have known any better having grown up in a bubble of privilege, and the grown ups arounds me were so heavily invested in this bubble and that they too were blinded to its existence as well. But as our industry has broadened and spread into all other forms of industry, morphing into a social force, I am glad to see that many of us are waking up to these realities and beginning to take responsibility for the roles we play in our new civilisation.

What I am saying though, is that as an individual who has enjoyed this privilege their whole life, I am at the very top of the list of people now responsible for any inequalities our tech civilisation continues to exhibit. The best positioned people to reduce privilege are those who currently enjoy its fruit, and I am by far a beneficiary of said privilege.

How do we begin to go about that though?

The Circles Of Our Influence

I talk often about my belief that product developers, especially the more privileged ones such as myself, are the most powerful individuals within our tech civilisation and have written in the recent past about the importance of ethical discourse in the context of the hiring of such individuals. If, then, we accept the suggestion that as individuals we are highly influential, then it would be incumbent on us to trace the impact that our civilisation has on the societies around us. Unless we measure our impact, we might never know whether we’re society’s guardian angels or perhaps no more than bulls in a china shop. 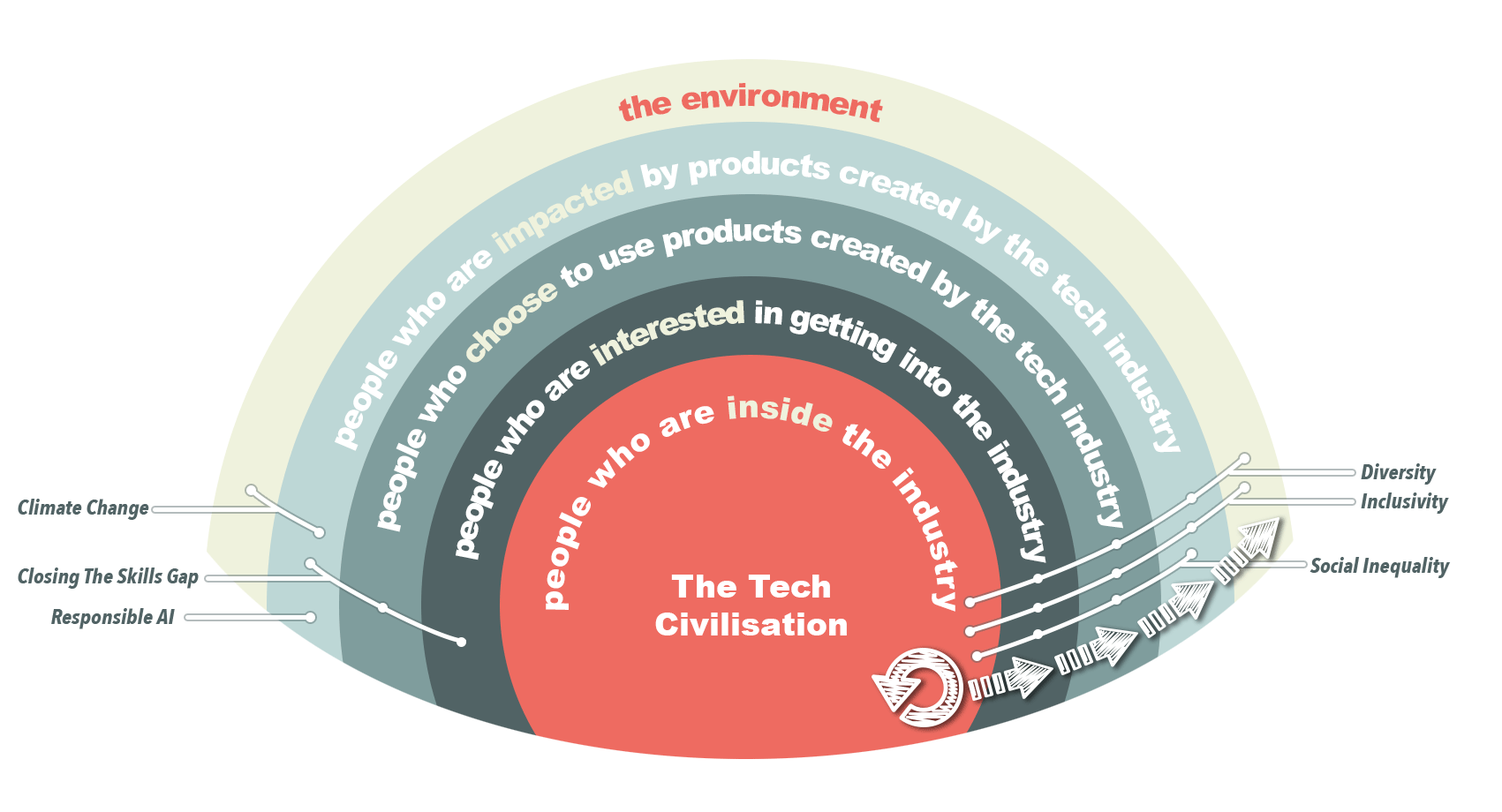 When I look at the tech civilisation as a whole, I see several circles of influence:

The precise impact we have on each one of these circles of influence would require a tome to enumerate, but what I would like to enumerate is a handful of categories which I feel can broadly encompass the different topics of conversation we should focus on.

By product developers I do not just mean people who write code, but rather all aspects of product creation.

The Topics Of Conversation

At Beyond Tech 2019 the organisers chose to focus on a handful of such topics of conversation. Bellow I give you my own take on these topics, as I see them.

The first topic is Diversity. I won’t go into all the reasons why diversity is important, as you would have to be disingenuous at this point to claim ignorance of the importance and virtues of a diverse community. This topic has been covered so many times, by so many writers and speakers far more eloquently than I could, that if you haven’t bought into it by now, you probably never will.

Diversity is a cross cutting topic, as the concerns around diversity influence every single one of the circles of influence.

The second topic is Inclusivity, which I find is often forgotten in the conversation, which is why many parts of our civilisation taking action to address their lack of diversity, end up losing their diverse members shortly after they joined.

The third is Responsible Artificial Intelligence & Machine Learning, which is the conversation about how these technologies are constructed and used.

The impact of these technologies is undeniable, otherwise we wouldn’t be working on them, but what is often forgotten or even actively denied, is that the way in which they operate is highly influenced by the individuals who build them. This seems counter intuitive, as surely the whole point of artificial intelligence is to sidestep the non-artificial influence, right? Well, what we find is that it is trivial for individuals working on these technologies to unintentionally influence them due to their own personal unconscious biases.

A great example of such influence is the choice made in the United States to use ML in their defendant risk assessments where the models were clearly fed historical data which did more to reflect biases already baked into the judicial system, rather than liberate this system of them.

The fourth is the role our civilisation can play in reducing social inequalities. As our produce is now deeply engrained into every individual industry on the planet (and beyond) we are well positioned to influence the economics of human civilisation as a whole.

We saw some great examples of this at Beyond Tech, such as the creator of Beam showing us how we can use tech to help individuals out of homelessness.

The fifth topic is a huge one: Closing The Skills Gap.

There are two verticals in which the skills gap is highly apparent. The first is the unprecedented growth in technology related jobs which has led to demand of technology workers massively outstripping supply. The second is the speed at which technology is making non-technology jobs redundant.

We have all witnessed how technology jobs have gone from being a specialism to the new blue collared job, but what we have not yet come to terms with is the decline in non technology jobs and the speed at which technology can actually make these jobs redundant.

For example, in the near future we’re likely to see a major decline in the professional driving sector as self-driving cars, trucks and public transport become ubiquitous. Much like the decline of the coal industry in the 1980s, we’re likely to see major shifts in employment of this sector in the span of a decade, during which millions of working individuals will become unemployed.

Retraining such individuals is going to be a huge challenge for our societies and we will have to address this challenge very soon.

Finally, the last major topic of conversation, from my perspective, is also the most urgent: Climate Change.

This is a glaring omission from the Beyond Tech conference, which I find hard to understand. None of the other concerns matter much if our climate collapses under the weight of continued human expansionism.

The role that our tech civilisation plays in climate change is far bigger than many of us care to admit, and the omission of such a topic from the conference bewilders me.

Ranging from clearly unsustainable practices, such as planned obsolescence of consumer products to the electrical usage of Cryptocurrency mining, the impact of our tech civilisation on climate change is undeniable.

This post covers my early thoughts following from last week’s conference, in their rawest form and you can expect more posts on the topic in the future.

That said these conversations aren’t new and I feel that we as a tech civilisation are well overdue in asking some tough questions.

My take on the conference was essentially this: a call for the tech industry to grow up, take responsibility for the role it now plays and ask it self what do I want to be when I grow up?